Use a Rainbow Bone on Delta Sans

Note: this spec is a b tier unobtainable.

Note: Don't be a dumbass and keep bothering wiki users saying this isn't unob. Just check the wiki tell us when you see we are right so we can laugh at you. - A guy who likes the song for delta sans.

E = A typical barrage attack that does about 99 damage per punch and lasts 5 seconds in total, also has a 3 second cooldown, so it can be kinda spammed.

R = Soul Throw, an attack that simply throws the target, it deals a whopping 179.7 damage though and has a short 3/4 second cooldown, its a pretty good move and I personally really like it.

F = Master Gaster Blaster, summons this huge Gaster Blaster that probably instantly kills anything, damage-wise, I have no hecking clue but it does 179.7 damage a lot of times, and I mean a lot. Sadly, it can only be used once, so use it when you know your opponent is cornered and can't do anything.

Z = Blaster Surfing, Rainbow Sans surfs on a Gaster Blaster that will force the user to not be able to move any higher up or down then they were before they used it, it also does 35 damage per hit if you ram into the opponent. This move is amazing, great mobility and since it lasts for 5 seconds and has 4/5 second cooldown, it's incredibly handy!

Left Click = Gaster Blaster, a typical Gaster Blaster move that does massive damage, it does 128.7 damage so many times, the text starts to flood and overlap. This move and Bone Blast make a really deadly combination if you can corner your opponent, the scariest part? If you finish blasting with one Gaster Blaster, you can immediately spawn another.

C = Teleport, It teleports a pretty good amount for only having 5 second cooldown, if you need in depth length, it can teleport you from one side of the fountain to the other.

G = Taunt, Rainbow Sans will do his iconic "Hands in hoodie while shaking" pose. A list of the music it can play is Megalovania , Stronger Than You , and a Piano Cover of Megalovania with lyrics.

In my opinion this Is a good spec, and also has a nice look! - Somebody who edited this page that isn't me.

Epic gamer fun stand/spec, really good and fun to use if you honestly know how to use it. - An Epic Gamer that also mains Rainbow sans. 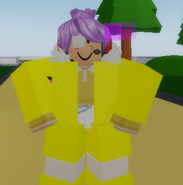 Retrieved from "https://a-bizarre-journey-roblox.fandom.com/wiki/Rainbow_sans?oldid=9527"
Community content is available under CC-BY-SA unless otherwise noted.